Ryokan or Inn by Junji Ito is going to take more words for me to explain.

A father abandons his family, makes them leave their house by manually digging a hole in the middle of their home, the father is obsessed to create an inn. This comic is funny, but also mirrors many facets of the fathers in our pop culture notebook, and yes also in our lives and reality.

Dad’s have a special place in our lives, don’t we? I wanted to write this on Father’s Day but didn’t and couldn’t and I have been procrastinating on writing the review on this one since many a few days. It’s not that the comic itself is very hard hitting or intense. It is on the contrary! It has wide range of emotions from multiple point of views with a generous dose of what can be termed as humorous. The reason for me to take a while to bring myself to write about it, is the nature of the comic which I will elaborate.

The father is selfish. But it doesn’t just stop there. He is surrounded by a very understanding wife, but he gives in to his dreams of what can be termed as evil.

Junji Ito is known for infusing human element with striking clarity. Here the simple plot of a father obsessed with a hot water sauna for tourists takes a maniac turn that breaks the family into bits.

Digging a hole in the middle of the house because the father dreamed about it. Can you even think about the barometer of selfishness? Wow. Even after lots of cajoling, the wife and children are pushed to take the drastic step of leaving the head of the house, hell bent on making his dream come true at the cost of his family. He doesn’t even looks at them when he leaves, and is busy doing his own thing. 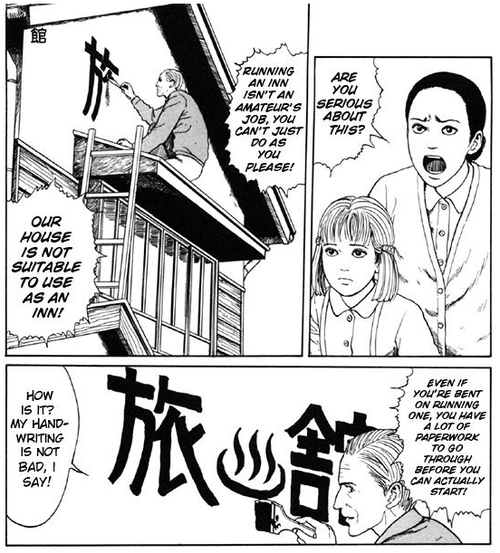 Agreed father have a very important role of being a provider, our society puts unnecessary strain on them to bring the money. This is especially true in a lot of Asian and south Asian countries, where the word of the head of the family is the last. Such strength each of their words brings. When you look at that, the consequence of them not doing their duties are plenty. Women tend to be dependent, and often discouraged to do anything on their own. When you bring the madness into the mix, the family suffers on the extreme. One of the reason the manic actions of the father shook me. 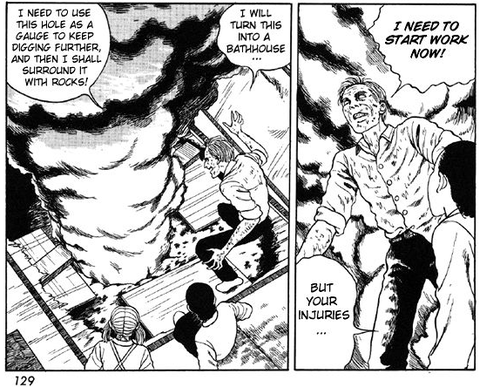 The reality runs deep in Junji Ito comics, and grips you unsuspectingly more than one time.

You may think the protagonist would be the offspring of the good for nothing father, but it is someone else totally took over from curiosity, and turns out to be a friend of the daughter. Which again brings this aspect to the light – how traumatized is the family, the even the daughter fails to find what her estranged father is upto. I think bringing a totally new character doing the exploring and progressing the plot is a very good move that further strengthens the point made previously the trauma that was caused by the father due to his questionable choices. 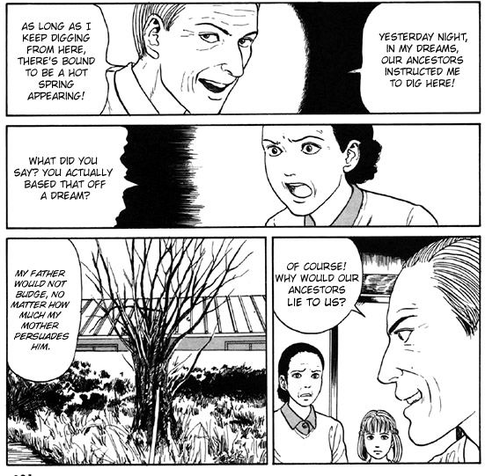 What happens next is fun conclusion, and worth watching that has hell, a portal to the other world, and yes sauna. While my review could be a little intense, but this is precisely why I like Junji Ito’s work, it is multi-dimensional, you can interpret the way you want. 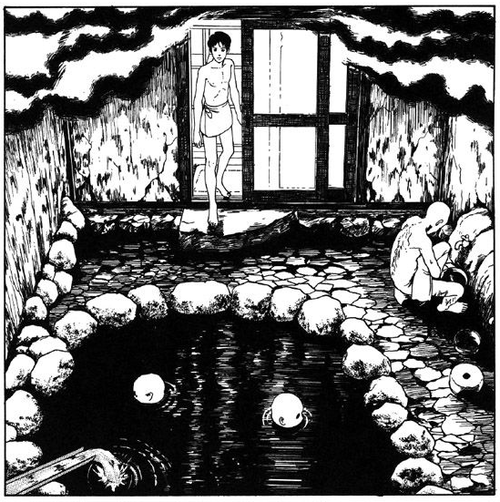 Ryoko Inn is a simple comic with a fitting conclusion and talks about mending. There is no other explanation of good or evil, but keeps the spotlight on madness, and loss. When the dad gets what he wanted, is he satisfied, and how did he survive? There is lonliness in the core which I found to be very human and so real. Truly our fathers go through bouts of lonliness as they age. And we can do is be there for them, no matter how they were in their youth.

When I think a little more I find this comic to have compassion in it, showing the other side of a father that hadn’t been kind. This is deep. Bringing evil in a comic and spinning the dread of loneliness in it. It is well worth reading it. Give it a go.

You can read the Manga here.

If you like this review from Junji Ito, then also read,

If you like what you read then don’t forget to subscribe! Head over the right hand side of the blog and share your email id for more entertaining opinion pieces and fan analysis of pop culture and writing hacks.

2 thoughts on “Ryokan by Junji Ito” 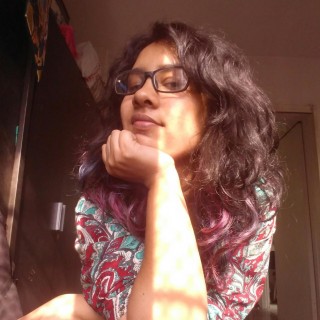